It's been a very exciting fall for Americans Who Tell the Truth and the Samantha Smith Challenge.

On September 9th we held our first fundraiser at Sally and Charlie Stone's beautiful home in Brooksville, Maine. (You can still contribute by clicking the "DONATE" button on our website!) The event featured the unveiling of Rob's portrait of Dr. Mona Hanna-Attisha, the pediatrician from Flint, Michigan, who blew the whistle on the lead in Flint's water and has been leading remediation efforts. Dr. Mona told her inspiring story to the guests. Then high school student Nicholas Parker from Hampden, whose piano composition as an 8th grader in reaction to the Samantha Smith story was the inspiration for the Samantha Smith Challenge, talked about what AWTT meant to him and played his music. Composer Mary Anne Driscoll from Belfast, who has been setting all of the AWTT portrait quotes to music, sang Dr. Mona's quote. Amazing hors d'oeuvres made by Logan Fordham and Jake Stamp topped off the evening. And importantly,  guests responded very generously, donating a total of $25,450. --  just over half of our individual fundraising goal for the year.

We want to thank everyone who contributed as well as all those on the AWTT board --- Joan Freeman, Sherry Streeter and  Dud Hendrick --- who put so much effort into the success of  the event.

The next day, September 10, Dr. Mona and her husband Dr. Elliot Attisha, also a pediatrician whose focus is asthma in inner city children, talked with a large group  at the Reversing Falls Sanctuary in Brooksville about a myriad of political, economic and health issues around lead poisoning and asthma.

On September 19th, Rob and Sherri Mitchell did a program together at the Belfast Library for a packed house. The library had been showing  9 portraits from the collection of indigenous people in the run up to Indigenous People's Day.  Belfast was the first community to Maine to rename Columbus Day. 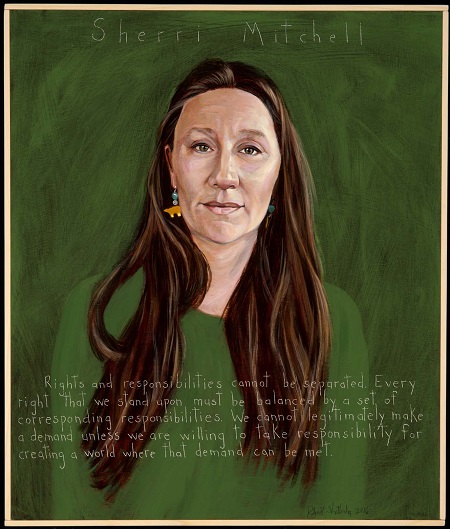 On September 25, Rob flew to Louisville, KY for Rob to speak at Thrivals, the kick off for Louisville's Idea Festival. (Rob's piece begins at the 53 minute mark). For  Thrivals the University of Louisville brings in a group of innovative artists, writers, business people, scholars, and activists to speak to 500 Louisville high school students. The organizers think that students, who will soon be making decisions as adults, need to be exposed to and involved in serious discussions about how to create a sustainable future. 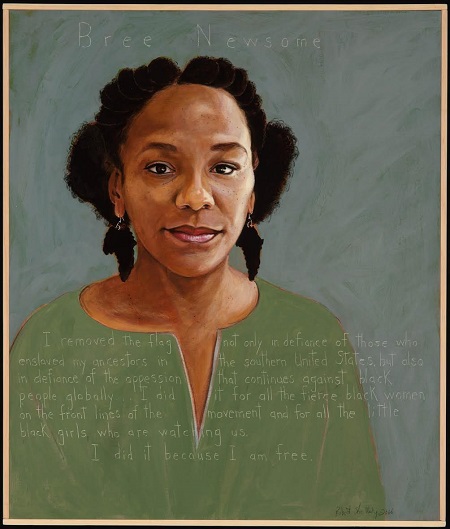 On September 27, Rob went on to Asheville, North Carolina where an exhibit of 56 portraits was mounted at the YMI Center. The feature event of this exhibit was the unveiling of the new portrait of Bree Newsome, the young woman who scaled the flagpole in Columbia, South Carolina (June 27, 2015)  and took down the Confederate Flag in the wake of the massacre at  Emmanuel AME Church in Charleston, SC. The night before the unveiling Rob interviewed Bree in front of a large audience at AB Tech Community College in Asheville. You can watch & listen to that interview here.

In conjunction with the exhibit, Rob spoke and did workshops in several local schools and more than 500 area students had their artwork of their own social justice heroes hung with Rob's portraits at the VMI Center.

On October 5 Rob spoke to several classes at Brewer HIgh School. Afterward students sent him their responses. Wrote one student:

"When I was told that the man giving our lecture, Robert Shetterly, was an artist, I prepared myself for an hour and a half of listening to the importance of "finding yourself" in your art….I soon realized that I had definitely underestimated painting and art in general after listening to this lecture… I wasn't really aware of some of the stories he told. We have grown up in sheltered community in a little town, all of us thinking in our little heads that each of us matter the most. We have committed a crime of sorts: settling for the answer "you don't need to know." Society has sheltered us from what really matters, from the truth, for far too long… The people that Robert Shetterly have painted are those who refused to settle, who risked their jobs, their families, and their lives to make the world better. Overall, I learned more about our world than anything else from Robert Shetterly, and I hope to carry this through my high school career."

On October 8, Rob flew to Syracuse for a week of meetings and teaching at the university. Over the past 6 years the relationship of AWTT and SU has become very deep all across the curriculum. The most exciting news to come out of this trip was the plan for the university to exhibit the entire portrait  collection a year from now. No one has ever done this. Rob has never seen them all together. SU plans to use the exhibit to bring in many of the portrait subjects for panels, classroom visits, and talks.

On October 13, Rob left Syracuse and went to speak  and do a workshop at the National Canvassers Conference outside of Paducah, KY. These are several hundred young people ( 20s & 30s) who do grassroots organizing primarily around water and environmental issues.  Also there to speak was Louis Clark, long time leader of the Government Accountability Project which defends whistleblowers, and Baldemar Velasquez, founder of the  Farm Labor Organizing Committee.  Baldemar, who led some of the most important farm labor movements in US history, may be a future portrait.

On October 20, Connie Carter (AWTT's Education Director) and Rob rolled out the 2017-2018 Samantha Smith Challenge at the annual conference of the Maine Association for Middle Level Education at Point Lookout in Lincolnville. We are very excited about continuing and expanding our SSC work this year.

The 2016-17 Samantha Smith Challenge saw over 500 middle school students from 11 Maine schools become activists as they addressed social, environmental, and economic issues important to them and engaged community stakeholders to work with them to move toward solutions.  A few of the issues addressed included immigration, homelessness, racism, climate change, teen mental health, threats to pollinators, gender inequality, and child abuse. The theme of social justice through the arts brought these students together at Thomas College on June 5 to showcase and share their work with each other as they saw firsthand the power of engaged citizenship. As one student stated, "This was truly a great experience; it taught me that anyone can change the world."

Partnering with the Maine Association of Middle Level Education and the Center for Innovation in Education at Thomas College, AWTT begins its fourth Samantha Smith Challenge this fall.  Gorham Middle School teacher Sarah Rubin captures the power of the SSC for students and teachers in the following comment: "The Samantha Smith Challenge not only gives my students the chance to meet learning standards through a meaningful and engaging project, but it allows them to follow their passions and give back to their communities.  It has enabled students who may not shine in a traditional classroom environment to be the stars and has given those who are leaders an opportunity to hone their leadership skills."

We've recently added several new portraits to the collection and the website: